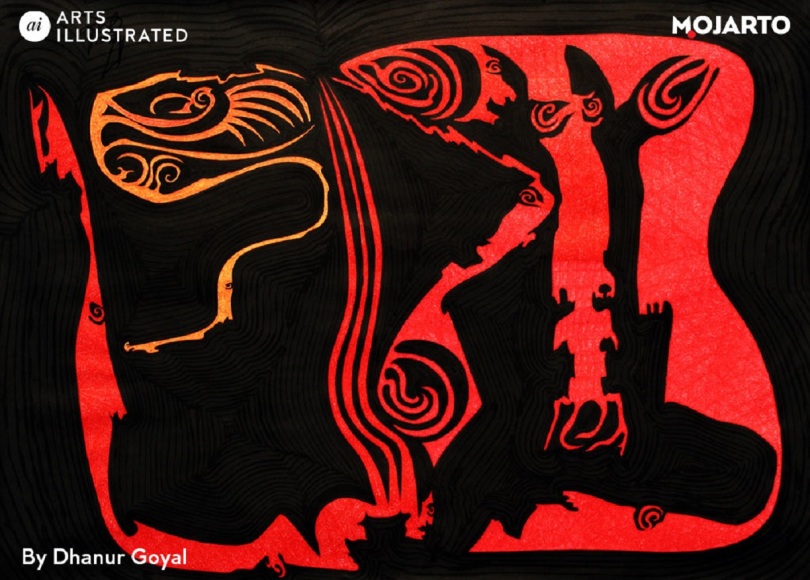 I’m mighty pleased to report that a story of mine won 3rd place in a contest hosted by Arts Illustrated! You can read ‘Beasts of Burden’ online here.

This win inspired me to share the story behind the story. The contest was based on the image above as a prompt.

I don’t know about you, but I found it pretty challenging to work with. It’s a fantastic picture, the red standing out on the canvas of black. The exotic shapes within also inspired me, but I couldn’t think of a story idea based on it right away.

I don’t typically write from picture prompts, being less visual more inclined to think in words. But I wanted to attempt this as a challenge, so I got down to doing the hard work.

First off, I compiled a list of all the nouns I could think of while looking at this picture. For me, I could see a tree, its bark, a snake, and a bird of some kind. The bottom-middle of the image suggested to me a woman bound and struggling, the three red lines indicating her hands and the ropes that tied her wrists.

Once I had this, I went back and read the stories from previous contests to get a feel of what the judges might be looking for. The contest imposes a restriction of 1000 words on the story length, and I found most winners utilized the limit given. The stories were also by and large contemporary, with a few harking back to a previous era.

I set aside the words and the notes I’d made, and spent some time thinking about the plot that it could inspire. This, for me, is usually the most productive period in the whole writing phase. At the end of it, I emerge with a fully-formed storyline in my head, ordered in scenes. Now all I have to do is write it down!

Of course, it’s easier said than done. The first draft invariably turns out crappy. But, as I do with every story I write, I set it aside for a week. When I returned to it, I revised and brought it down to less than the 1000-word limit. In subsequent edits I focused on improving the story at a sentence level, refining the language and the words wherever I could.

And the end result proved satisfactory. Regardless of how a story fares when on submission, my litmus test for it is to gauge whether I’m happy with it or not. And I was quite content with my efforts when I hit send on this story.

Do read ‘Beasts of Burden’ and let me know what you think!